Its Official: We're The Best for our Members.... 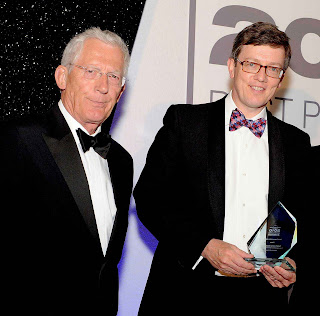 I hope I can be forgiven for the trumpet-blowing - I am so proud of what we as a relatively new (5 years old) trade association with a very small part-time team have achieved for our members. It is wonderful to have it publicly recognised in such a prestigious fashion.

Last Thursday night at a black-tie dinner at the Hotel Russell in London, I collected an award for the Bed and Breakfast Association from Nick Hewer (Alan Sugar's quizzical and acerbic sidekick from 'The Apprentice'): the "Sector Representation Award" from the CBI's Trade Association Forum.

What does this mean? Simply that the Bed and Breakfast Association has been judged the best trade association in Britain (out of 313 associations across all sectors of business) and representing its members and its sector. Quite an accolade!

We were given the Award in recognition of what we achieved for members in helping lighten the burden of compliance for small B&Bs of the 2006 fire regulations - after our campaign involving two ministers and their shadows, a Downing Street Petition and the support of organisations representing nearly half a million small businesses, both the Westminster and Edinburgh governments introduced new and much less onerous guidelines for small B&Bs (see my earlier blog).

So the small guys can sometimes win a battle or two with the authorities! Worth celebrating, don't you think?
Posted by David Weston at 10:20