We have had an email from a member who says:

"I wondered if you had had any other questions about computers on beds.  I have had an incident where a duvet protector had a large hole in it, I didn't think anything of it and duly placed it on Monday.  However, I now have a hole in the new protector and a scorch stain on the duvet cover.  On closer inspection it would appear that the guest is using her computer on the bed, and it looks like it has been left on all night and scorched both the duvet cover and protector together.  I am now very concerned that this could quite possibly have started a fire.  I wondered if you had received any other correspondence on this issue and if your members had any suggestions to counteract this problem.  I do have desks and bedside tables in the rooms which guests can use, but it seems to be becoming commonplace to sit on the bed with the computer.
"I have decided to put warnings in all of my bedrooms but I would be interested to hear if this is a general problem, or whether it is just this one guest.  I have already had a word with her as I do like to sleep soundly in my own bed, as well as the other guests." 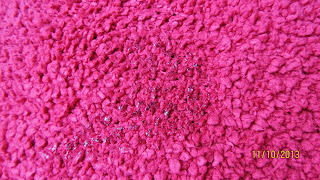 The picture shows the "throw" used to cover the bed, scorched by the guest's laptop.